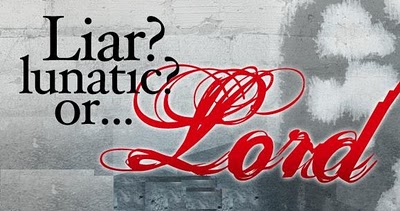 
Jesus' distinct claims of being God eliminate the popular ploy of skeptics who regard Him as just a good moral man or a prophet who said a lot of profound things.


So often that conclusion is passed off as the only one acceptable to scholars or as the obvious result of the intellectual process.


The trouble is, many people nod their heads in agreement and never see the fallacy of such reasoning.
Analyzing Jesus' Claim To Be God
C. S. Lewis, who was a professor at and once an agnostic, understood this issue clearly.
He writes: "I am trying here to prevent anyone saying the really foolish thing that people often say about Him: 'I'm ready to accept Jesus as a great moral teacher, but I don't accept His claim to be God.' That is the one thing we must not say. A man who was merely a man and said the sort of things Jesus said would not be a great moral teacher. He would either be a lunatic -‑ on a level with the man who says he is a poached egg ‑- or else he would be the Devil of Hell. You must make your choice. Either this man was, and is, the son of God: or else a madman or something worse."
Then Lewis adds: "You can shut Him up for a fool, you can spit at Him and kill Him as a demon; or you can fall at His feet and call Him Lord and God. But let us not come up with any patronizing nonsense about His being a great human teacher. He has not left that open to us. He did not intend to."
In the words of Kenneth Scott Latourette, historian of Christianity at : "It is not His teachings which make Jesus so remarkable, although these would be enough to give Him distinction. It is a combination of the teachings with the man Himself. The two cannot be separated."
Jesus claimed to be God. He didn't leave any other option open. His claim must be either true or false, so it is something that should be given serious consideration.
Jesus' question to His disciples, "But who do you say that I am?" (Matthew 16:15) has several alternatives.
First, suppose that His claim to be God was false. If it was false, then we have only two alternatives. He either knew it was false or He didn't know it was false.
We will consider each one separately and examine the evidence.

Was He a Liar?

If, when Jesus made His claims, He knew that He was not God, then He was lying and deliberately deceiving His followers.
But if He was a liar, then He was also a hypocrite because He told others to be honest, whatever the cost, while He himself taught and lived a colossal lie.
More than that, He was a demon, because He told others to trust Him for their eternal destiny. If He couldn't back up His claims and knew it, then He was unspeakably evil.
Last, He would also be a fool because it was His claims to being God that led to His crucifixion.
Many will say that Jesus was a good moral teacher. Let's be realistic. How could He be a great moral teacher and knowingly mislead people at the most important point of His teaching ‑- His own identity? You would have to conclude logically that He was a deliberate liar.
This view of Jesus, however doesn't coincide with what we know either of Him or the results of His life and teachings.
Wherever Jesus has been proclaimed, lives have been changed for the good, nations have changed for the better, thieves are made honest, alcoholics are cured, hateful individuals become channels of love, unjust persons become just.
William Lecky, one of Great Britain's most noted historians and a dedicated opponent of organized Christianity, writes: "It was reserved for Christianity to present to the world an ideal character which through all the changes of 18 centuries has inspired the hearts of men with an impassioned love; has shown itself capable of acting on all ages, nations, temperaments and conditions; has been not only the highest pattern of virtue, but the strongest incentive to its practice.... The simple record of these 3 short years of active life has done more to regenerate and soften mankind than all the disquisitions of philosophers and all the exhortations of moralists."
Historian Philip Schaff says: "How, in the name of logic, common sense, and experience, could an imposter -‑ that is a deceitful, selfish, depraved man -‑ have invented, and consistently maintained from the beginning to end, the purest and noblest character known in history with the most perfect air of truth and reality? How could He have conceived and successfully carried out a plan of unparalleled beneficence, moral magnitude, and sublimity, and sacrificed His own life for it, in the face of the strongest prejudices of His people and age?"
If Jesus wanted to get people to follow Him and believe in Him as God, why did He go to the Jewish nation? Why go as a Nazarene carpenter to a country so small in size and population and so thoroughly adhering to the undivided unity of God? Why didn't He go to or, even more, to , where they believed in various gods and various manifestations of them?
Someone who lived as Jesus lived, taught as Jesus taught, and died as Jesus died could not have been a liar.

Was He a Lunatic?

If it is inconceivable for Jesus to be a liar, then couldn't He actually have thought Himself to be God, but been mistaken? After all, it's possible to be both sincere and wrong.
But we must remember that for someone to think himself God, especially in a fiercely monotheistic culture, and then to tell others that their eternal destiny depended on believing in him, is no light flight of fantasy but the thoughts of a lunatic in the fullest sense.
Was Jesus Christ such a person?
Someone who believes he is God sounds like someone today believing himself Napoleon. He would be deluded and self‑deceived, and probably he would be locked up so he wouldn't hurt himself or anyone else.
Yet in Jesus we don't observe the abnormalities and imbalance that usually go along with being deranged. His poise and composure would certainly be amazing if He were insane.
Noyes and Kolb, in a medical text, describe the schizophrenic as a person who is more autistic than realistic. The schizophrenic desires to escape from the world of reality. Let's face it; claiming to be God would certainly be a retreat from reality.
In light of the other things we know about Jesus, it's hard to imagine that He was mentally disturbed. Here is a man who spoke some of the most profound sayings ever recorded. His instructions have liberated many individuals from mental bondage.
Clark H. Pinnock asks: "Was He deluded about His greatness, a paranoid, an unintentional deceiver, a schizophrenic? Again, the skill and depth of His teachings support the case only for His total mental soundness. If only we were as sane as He!"
A student at a university told me that his psychology professor had said in class that "all he has to do is pick up the Bible and read portions of Christ's teaching to many of his patients. That's all the counseling they need."
Psychiatrist J. T. Fisher states: "If you were to take the sum total of all authoritative articles ever written by the most qualified of psychologists and psychiatrists on the subject of mental hygiene ‑- if you were to combine them and refine them, and cleave out the excess verbiage -‑ if you were to take the whole of the meat and none of the parsley, and if you were to have these unadulterated bits of pure scientific knowledge concisely expressed by the most capable of living poets, you would have an awkward and incomplete summation of the Sermon on the Mount. And it would suffer immeasurably through comparison. For nearly 2,000 years the Christian world has been holding in its hands the complete answer to its restless and fruitless yearnings. Here ... rests the blueprint for successful human life with optimism, mental health, and contentment."
C. S. Lewis writes: "The historical difficulty of giving for the life, sayings and influence of Jesus any explanation that is not harder than the Christian explanation is very great. The discrepancy between the depth and sanity...of His moral teaching and the rampant megalomania which must lie behind His theological teaching unless He is indeed God has never been satisfactorily explained. Hence the non‑Christian hypotheses succeed one another with the restless fertility of bewilderment."
Philip Schaff reasons: "Is such an intellect ‑- clear as the sky, bracing as the mountain air, sharp and penetrating as a sword, thoroughly healthy and vigorous, always ready and always self‑possessed -‑ liable to a radical and most serious delusion concerning His own character and mission? Preposterous imagination!"

I cannot personally conclude that Jesus was a liar or a lunatic. The only other alternative is that He was the Christ, the Son of God, as He claimed.
When I discuss this with most Jewish people, it's interesting how they respond. They usually tell me that Jesus was a moral, upright, religious leader, a good man, or some kind of prophet. I then share with them the claims Jesus made about Himself and then this material on the trilemma (liar, lunatic, or Lord).
When I ask if they believe Jesus was a liar, there is a sharp "No!"
Then I ask, "Do you believe He was a lunatic?" The reply is, "Of course not."
"Do you believe He is God?"
Before I can get a breath in edgewise, there is a resounding, "Absolutely not."
Yet one has only so many choices.
The issue with these 3 alternatives is not which is possible, for it is obvious that all 3 are possible. Rather, the question is, "Which is more probable?"
Who you decide Jesus Christ is must not be an idle intellectual exercise. You cannot put Him on the shelf as a great moral teacher. That is not a valid option.
He is either a liar, a lunatic, or Lord and God. You must make a choice.
"But," as the apostle John wrote, "these have been written that you may believe that Jesus is the Christ, the Son of God; and" ‑- more important ‑- "that believing you might have life in His name" (John 20:31).
The evidence is clearly in favor of Jesus as Lord. Some people, however, reject this clear evidence because of moral implications involved. They don't want to face up to the responsibility or implications of calling Him Lord.
Note: This devotion is not original with me, I found it at: http://www.ccci.org

I look forward to bringing and writing many devotions in the future.

Posted by BibleFood Devotional Blog at 1:11 PM No comments: