Spiritual leprosy of all sinners!

My apologies for not keeping current on these devotions,

I have other blogs, and also tweet some inspirational and life stuff.

My other blog you may be interested in is:  http://blessedtobeachristian.wordpress.com

and my BibleFood tweets are found at:

Today's devotion is written by Charles H. Spurgeon in the 1800's.
It is taken from "The Morning and Evening Devotional"  http://www.ccel.org/ccel/spurgeon/morneve.toc.html 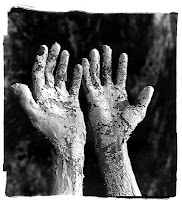 Spiritual Leprosy of All Sinners!

“Behold, if the leprosy have covered all his flesh,
he shall pronounce him clean that hath the plague". Leviticus 13:13

Strange enough this regulation appears, yet there was wisdom in it, for the throwing out of the disease proved that the constitution was sound. This morning [today] it may be well for us to see the typical teaching of so singular a rule. We, too, are lepers, and may read the law of the leper as applicable to ourselves. When a man sees himself to be altogether lost and ruined, covered all over with the defilement of sin, and no part free from pollution; when he disclaims all righteousness of his own, and pleads guilty before the Lord, then is he clean through the blood of Jesus, and the grace of God. Hidden, unfelt, unconfessed iniquity is the true leprosy, but when sin is seen and felt it has received its death blow, and the Lord looks with eyes of mercy upon the soul afflicted with it. Nothing is more deadly than self-righteousness, or more hopeful than contrition. We must confess that we are “nothing else but sin,” for no confession short of this will be the whole truth, and if the Holy Spirit be at work with us, convincing us of sin, there will be no difficulty about making such an acknowledgment—it will spring spontaneously from our lips. What comfort does the text afford to those under a deep sense of sin! Sin mourned and confessed, however black and foul, shall never shut a man out from the Lord Jesus. Whosoever cometh unto him, he will in no wise cast out. Though dishonest as the thief, though unchaste as the woman who was a sinner, though fierce as Saul of Tarsus, though cruel as Manasseh, though rebellious as the prodigal, the great heart of love will look upon the man who feels himself to have no soundness in him, and will pronounce him clean, when he trusts in Jesus crucified. Come to him, then, poor heavy-laden sinner,

Posted by BibleFood Devotional Blog at 5:57 PM No comments: